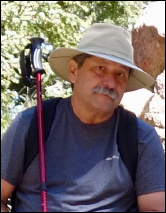 PRESENTER FOR NOVEMBER IS:  John Martinez & Nils Schirrmacher – Dudleya: Succulent Diversity in Our Own Backyard”

Our local mountains are home to a plentiful and varied assortment of Dudleya. Each of the 11 species and 6 subspecies inhabiting the Santa Monica’s and San Bernadino’s can be found within an hour’s drive from central Los Angeles. For the past four years,John Martinez and Nils Schirrmacher have photographed these succulents in habitat,
trekking slopes and canyons to uncover our native treasures. The introduction to the breadth of our local Dudleya will feature their photos and impart lessons learned in the field.

John Martinez currently lives in Moorpark with his wife Linda and is a retired Los Angeles Fire Department Battalion Chief. He is a member of several local garden clubs and a past volunteer at the Huntington Botanical Garden. Over the past 9 years he has shared a co-op succulent growing compound in Somis with three experienced growers of cactus, succulents, and other exotics. Aside from maintaining his plant collection, John’s time is divided between gardening, golf, photography, occasional fly fishing, and grandchildren. As a native of Southern California John attended California State University of Northridge where he received a Bachelor’s Degree in Art. 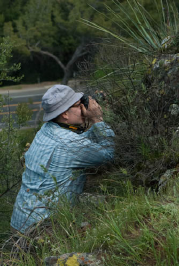 Nils Schirrmacher has been collecting succulents since 1999, the year he joined the CSSA. In 2005, he became a member of the Los Angeles Cactus and Succulent Society and currently serves as club historian. From his Los Angeles apartment, he’s building a collection of seed-grown plants that includes members of the Aizoaceae, or mesembs. This pursuit lead to his joining the Mesemb Study Group in 2014. Nils holds a Master’s Degree in Art from UC Irvine and has had several gallery exhibitions of his work. By day, he works as an Art Handler.