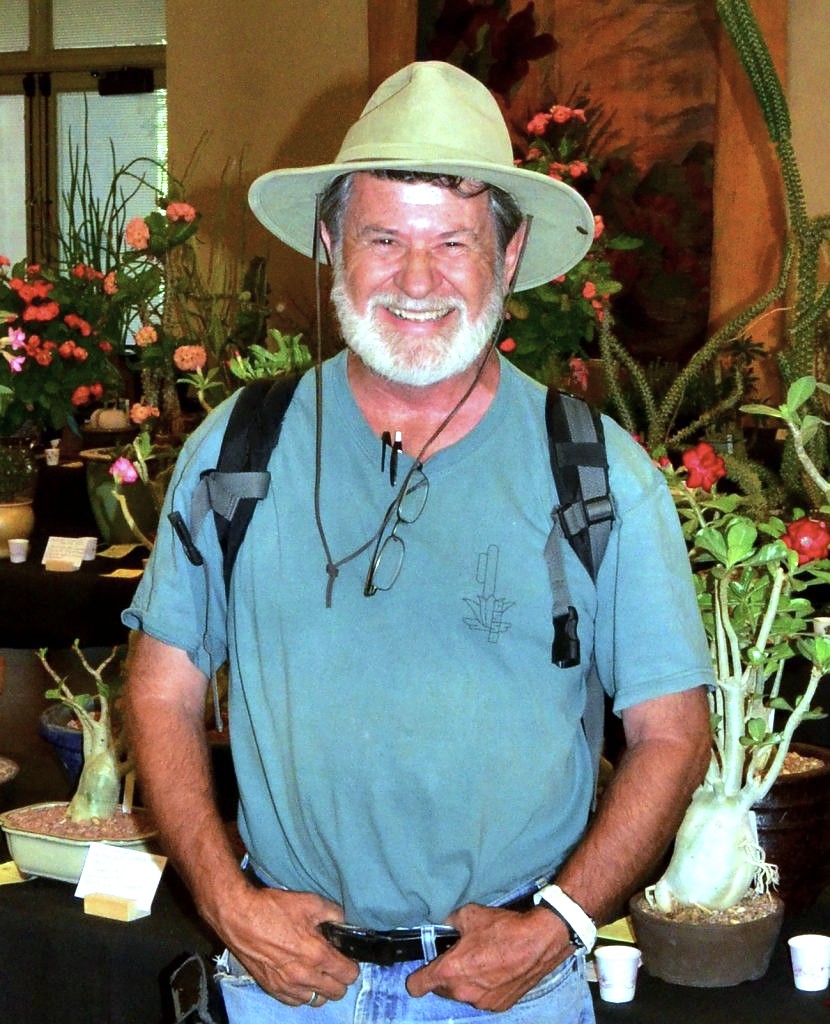 PRESENTER FOR AUGUST IS: Woody Minnich – “20 Years in the Atacama, Land of the Copiapoas”

Similar to the coast of Namibia, the coastal and inland regions of northern Chile, known as the Atacama, is mainly watered by amazing fogs, “the Camanchacas.” These fog-fed regions, in two of the driest deserts in the world, have some of the most interesting cactus and succulents to be found anywhere. The Atacama of northern Chile has an endemic genus considered by many to be one of the most dramatic to have ever evolved, the Copiapoa. This ancient genus is also believed to be tens of thousands of years old, and there are those who feel it might well be on its way out! The ocean currents that affect the coastal Atacama have changed considerably over the last hundreds of years, and now its only source of moisture is primarily from consistent dense fogs. Some of these areas rarely, if ever, get rain and the plants that have evolved there live almost entirely off the heavy condensation from the Camanchaca.

There are many different Copiapoa species ranging from small quarter sized subterranean geophytes to giant 1,000-year-old, 300-head mounding clusters. Thanks to Rudolf Schulz’s excellent field work and his two comprehensive Copiapoa books, we have all been introduced to these amazing plants. Having worked with Rudolf in Chile, I can honestly say that the genus Copiapoa is without comparison! Now, having visited Chile numerous times over the last 20+ years, I have become familiar with most all of the representatives of this genus. With this presentation, I hope to taxonomically introduce you to most of the Copiapoa species as well as show their relationships and synonyms. Along with the Copiapoa, we will also encounter many other genera including the Neochilenias, Neoporterias, Eriosyce, Eulychnias, Trichocereus, as well as many of the other Chilean succulents. Chile also offers some of the best lunar landscapes, geologic formations, and spectacular beaches to be found in all of South America.

This last August 2018, I had the pleasure of leading a group of 20 crazy cactophiles in seven four-wheel drive trucks. Our objectives were to see most of the fantastic plants and spectacular scenery that are to be found in this the land of the Camanchaca. Most of our group were very young adults (25-35yrs), and they all wanted to see and know how us old timers (Rudolf, Woody, Ritter and Charles) used to do our explorations to the wild and seldom seen places of Chile. Not only did we take them on very bad roads, the kind of dusty, dirty two tracks we used to have to maneuver, we also had them camp out in the middle of nowhere with the scorpions. No restaurants, no showers, no beds, and no bar! These camp-outs were exceptional as we could often see, without light pollution, the Southern Cross and the Magellanic Lights until the Camanchaca fog slowly blanketed our campfire discussions. What an incredible trip it was! The energy of the young people and my memories of the last 20+ years in Chile made this an epic adventure, one I will never forget! Join me at the meeting, and hopefully you’ll share our exhilarating experience and the overall magic of this wonderful arid region, the Atacama.

Having been a speaker all over the world, Woody is most often associated with giving presentations on his field work from the places he has traveled, such as:  Argentina, Australia, Bolivia, Brazil, Chile, Madagascar, Mexico, Namibia, New Zealand, Peru, Socotra, South Africa, the United States and Yemen. He is also recognized for having operated the nursery Cactus Data Plants since 1975. Woody’s show quality plants are often considered one of the standards for staging and horticultural achievement. His favorite genera include: Adenium, Ariocarpus, Astrophytum, Copiapoa, Cyphostemma, Fouquieria, Gymnocalycium, Lithops, Mammillaria, Melocactus, Pachypodium, Turbinicarpus, Uebelmannia, and Pachycauls in general.

He has published numerous articles and reviews in various journals (CSSA) and his photography is featured in many books including; “The Copiapoa” by Schulz, “The Mammillaria Handbook” by Pilbeam, “The Cactus Lexicon” By Hunt and Charles, as well as many others. As of November 2017, he is featured as the primary photographer in the new book “The Xerophile.” This book specializes in what the authors call, The Obsessed Field workers from around the world. He is also featured in electronic articles about conservation from “MNN Mother Nature Network” and “The Guardian Newspaper.”

Woody and his wife, Kathy, live in Cedar Grove, New Mexico. He is a retired secondary school teacher of 32 years where he taught Graphics, Art and Architecture. In the cactus and succulent hobby, Woody is recognized for his high energy and creative spirit. As an educator, he has become an important part of the hobby and thus is an honorary life member of eleven C&S societies. With 49 years in the hobby and 64 years in the field, he has many experiences to share and numerous photos to show.